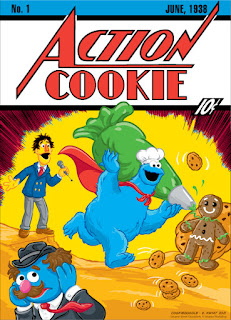 Here is another "just for fun" CookieDoodle.  A super Cookie Monster baker is adding the finishing touches to his creation.

Action Comics #1, from 1938, is where Superman was first introduced to the world. Jerry Siegal and Joe Shuster had unsuccessfully tried to sell their character as a newspaper strip during the 1930's. They finally got National Publications, later to become DC, to publish their character in the new format of comic books and begin the superhero boom.

In the early 1960's I once showed my father a small article from Newsweek about a copy of Action Comics #1 selling for $1000. He was shocked and wondered how a "funny book" could be worth that much money. I can only imagine his reaction now that a copy of that comic book has sold for over $3,000,000.


For many people, monsters and creatures of all sorts are weird things for someone to enjoy; but the dual nature of our personalities and learning to deal with fear and what is uncontrollable in our lives is common to us all. Humor is a useful tool for that purpose.

Contents and original artwork © ernie kwiat.
Other art is used for discussion purposes only and all rights are reserved by their respective copyright holders.